The other week I picked up OPI's Houston We Have a Purple at the Regis Salon for like 60% off. I wasn't thrilled with the swatches I'd seen from the Texas collection but I thought "I have no OPIs....I might as well get this one." I don't regret it but I'm not sure I'm 100% happy with this polish. It was quite opaque enough for my taste. Even at 3 coats there were still a couple spots that were patchy. But the color is more fun than I thought it would be.

Now if you haven't figured it out, I have a problem with leaving my nails at just one color. So this time I decided to go dark. I tipped the nails with Claire's Galaxy. Its a black jelly with tons of silver glitter. Lots of fun. These looks really messy because Galaxy stuck to the scotch tape I used. I would suggest doing one tip at a time so it doesn't have time to get tacky enough before pulling off the tape. 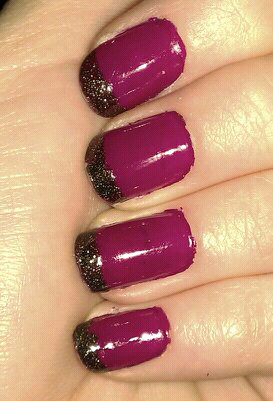 So this is  3 coats of OPI's Houston We Have a Purple with Claire's Galaxy tips.
Posted by Krissi Kaos at 1:01 PM

I'm a real person with a real job. I don't make much and don't have a ton of time to spend on blogs. But I wanted to bring a page to everyone that shows that anyone can be proud of whatever their passion may be no matter how unskilled or unprofessional they may be. Here you'll find my home done manicures and other things I feel I want to share. and you'll get all of that without the elitist attitudes or desperate need to be accepted. I know, that sounds crazy in this mixed up blogging world, but I never claimed to be normal. Any way you cut it though, it ought to be a fun ride. So hold on tight, But don't close your eyes. :-)