So, I'm sure many of your have heard that Finger Paints has a new line of Flaky topcoats coming out in January. It just so happens that some of us have lucked out and gotten our hands on them a bit early. 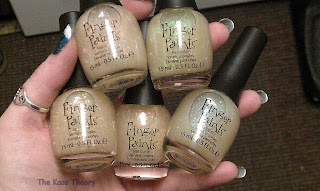 The girls in PaA have been drooling over these and asking a lot of questions...and I'm here to answer the big one.

Is Twisted a dupe for Cult Nails Unicorn Puke/Clairvoyant???   Well, let us see... 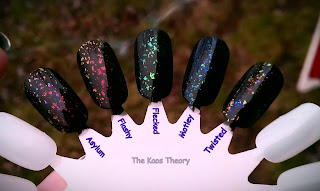 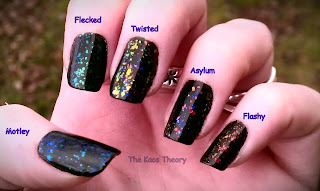 I think they look even better on the nail.
These are over Hard Candy's The End.

And now, the main question. How these compare to Cult Nails Clairvoyant...

These are all 2 coats of the base color. I used 1 coat for Clairvoyant and Twisted and 2 coats for Asylum.

I tried them over China Glaze White on White. 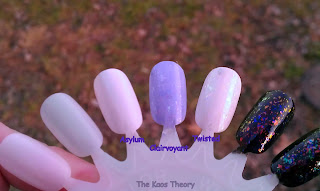 The nature of these flakes don't allow them to show up too well on white or light colors.
And of course Clairvoyant has a purple jelly base. 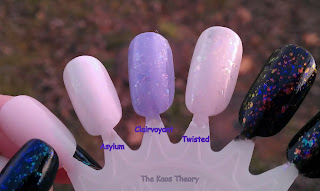 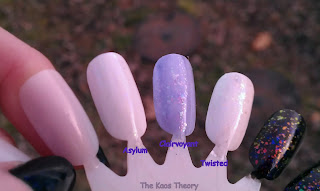 Over Hard Candy The End... 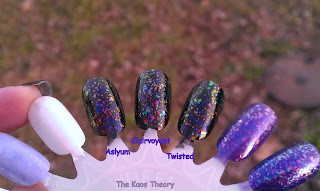 As you can see Twisted has a bit of yellow in it. 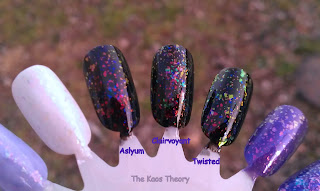 This is the truest showing of Asylum. Most of the time its just red/orange and blue. 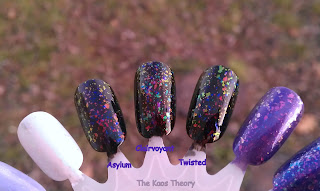 And now, over Sally Hansen Xtreme Wear Deep Purple. I used Clairvoyant over this for a full mani when I first got it and absolutely loved it! 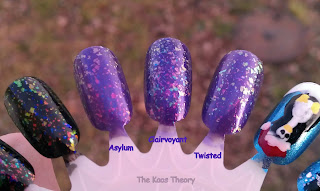 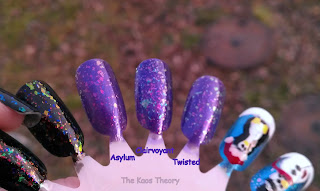 Here you can see that Asylum doesn't come nearly as close. 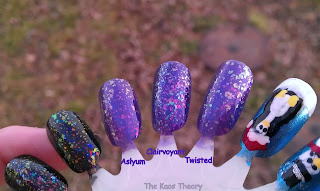 So I feel that while they're not exact dupes, Twisted is close enough to scratch the Unicorn Puke/Clairvoyant itch if you're short on cash. It's a little less dense but you can always do 2 coats to make up the difference. My guess is a coat of Twisted over a coat of Asylum would be the closest you'll get. Unfortunately I didn't think to try it until just now haha.

The Finger Paints Special Effects will be available at Sally's Beauty in January. They're $4.99 each if you have a beauty club card. Cult Nails Clairvoyant is part of the Super Powers collection and is normally $10. It will be back in stock in February.

I'm a real person with a real job. I don't make much and don't have a ton of time to spend on blogs. But I wanted to bring a page to everyone that shows that anyone can be proud of whatever their passion may be no matter how unskilled or unprofessional they may be. Here you'll find my home done manicures and other things I feel I want to share. and you'll get all of that without the elitist attitudes or desperate need to be accepted. I know, that sounds crazy in this mixed up blogging world, but I never claimed to be normal. Any way you cut it though, it ought to be a fun ride. So hold on tight, But don't close your eyes. :-)